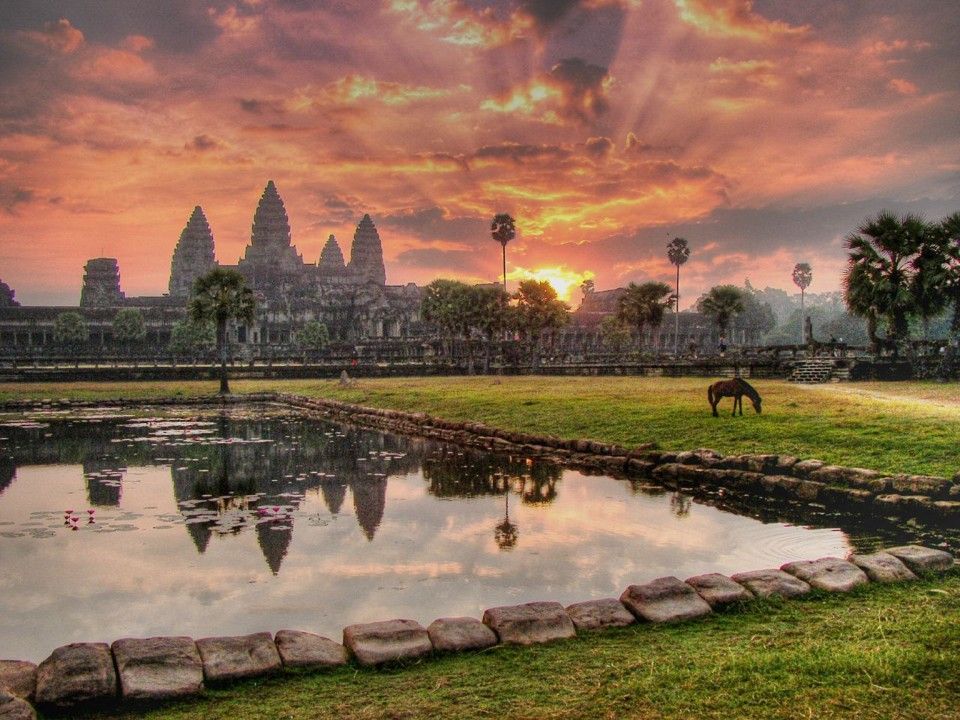 Cambodia might be one of South East Asia’s smallest countries, but it is superlative in stature. Though the nation was brought to its knees under Pol Pot’s destructive regime in the 1970s, it has recovered sufficiently to become one of the highlights of South East Asia. It’s a beloved spot for backpackers, who can enjoy 50-cent beers whilst overlooking some of the most awe-inspiring historical remains on the planet. While, the striking magnificence of the Angkor Temples has long been the main draw for budget and luxury travellers alike, as has the country’s ancient Khmer heritage, wild jungles, steamy cities and a past that’s equal parts inspiring and saddening.

So travelling to Cambodia in opposite of traveling to Myanmar is easy and comfortable. Cambodia is highly recommended for both FIT and for incentive groups. Siem Reap ( Angkor Wat) – biggest tourist attraction of Cambodia and one of the MUST TO SEE BEFORE YOU DIE – is easily accessible by direct flight. Siem Reap has now 22 international direct flights although most popular gateways are Bangkok, Hanoi, Saigon, DaNang, Singapore.
Best time to visit:
Being located in the tropical zone north of the equator, Cambodia has a monsoon climate. Monsoon season runs May – October, meaning that the most pleasant season for visitors is generally the dry season, stretching from November/December till April. Immediately after the monsoon, the blanketing green of the countryside can be stunningly beautiful.
In the north, winters are generally colder, while throughout most of the country temperatures remain fairly constant. The average year-round temperature in Cambodia is 28°C (the highest monthly average being 35°C, the lowest monthly average being 21°C). There is often seasonal flooding in Phnom Penh and the rest of Cambodia in late July and early August, and, because the majority of roads are dirt, travel may be disrupted at these times. At the peak of the wet season it can rain as often as two in every three days.
While the rain may affect certain outdoor activities when travelling (many hiking, biking or boat cruise companies will cancel excursions), the temperature is pleasant and in the larger cities the Most recommended places ( attractions) to be visited:
Angkor Wat, one of the most spectacular ancient sites in the World. The former capital of the ancient Khmer Empire, is one of the greatest and most spectacular Hindu religious sites in the world. Construction of this elaborate temple complex – built in honor of the god Vishnu – began in AD 879 during the reign of King Suryavarman II and was completed in 1191. It lay concealed for many years, however, until the site was discovered by Frenchman Henri Mahout in 1860. The central complex, Angkor Wat, features an elaborate, unmortared 66-metre central tower surrounded by four smaller towers. Stretching around the outside of the temple complex is an 800m-long (2625ft) bas-relief, the longest in the world. This is Cambodia’s most iconic sight, and particularly popular at sunset among tour groups. The temple is so synonymous with the country that it dominates the national flag, and to visit it today is to marvel at the scale of its ambition, built as it was in the 12th century.
Bayon. Another of the most distinctive Angkor temples, Bayon is characterized by a series of colossal stone faces, gazing out serenely in all four directions, as well as some painstakingly detailed basreliefs. Bayon was built at a similar time to Angkor Wat.
Cycling around Angkor. Hire a bike and spend a few days exploring the myriad glories of the jungled Angkor Temple Complex. The showpiece architecture of Angkor Wat makes it the best known of the temples, but there are dozens of others to discover.
Dolphin spotting. The claim to fame of the Mekong town of Kratie is its population of Irrawaddy river dolphins. Various tour operators organize early-morning boat trips to observe these peaceful creatures in their natural habitat.
Cambodia’s coastline offers the chance for the archetypal Asian beach experience, but no amount of sea and sand is complete without sampling its ocean-fresh seafood. The stretch around Kampot and Kep is excellent for just-caught crab.
Royal Palace. Phnom Penh’s showpiece attraction was built in the 1860s, and makes for a spectacular sight with its stupas, murals and towering spires. The adjoining Silver Pagoda houses a number of precious Buddha statues, while the tropical plants of the palace gardens have appeal in their own right.
Shop for silver. Prized locally since the 11th century, silver is today one of the most soughtafter Cambodian souvenirs. Coming in the form of anklets, jewellery and other decorative items, it’s known for being fashioned with real care and artistry.
Sihanoukville. The port city’s main draw is its relaxed beach atmosphere, a laid-back counterpoint to the more visited coastal areas of neighbouring Thailand. It takes its name from King Norodom Sihanouk, one of the main agitators for independence from France.
Ta Prohm. Perhaps the second most famous Angkor Temple after Angkor Wat, Ta Prohm is best known for the roots and branches that have taken hold of its walls to picturesque effect. The temple featured as a location in the film Tomb Raider.